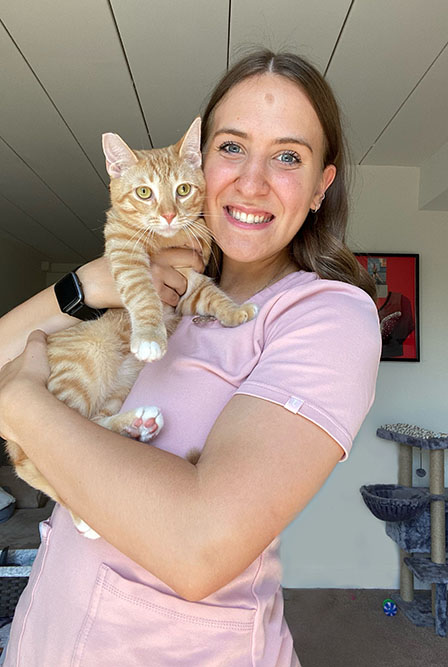 Skylar grew up on Long Island, New York. She attended college at Ursinus College in Pennsylvania where she studied Communications. She was also a member of the Ursinus College gymnastics team where she earned All-America honors. Skylar’s passions growing up always included animals. She remembers always having a household full of pets including fish, cats, dogs, bunnies, gerbils and birds. After graduating college, she rescued 2 cats of her own.

Skylar knew that her dream career would involve working with animals, so briefly after graduating she began working at Wagsworth Manor Pet Resort as a caretaker for the dogs and cats who were boarding. Meanwhile, she was taking classes through Animal Behavior College in order to further her education in animal science. Skylar also spent her time volunteering at the Black Cat Cafe in Devon, Pennsylvania; a non-profit restaurant who donates all of their earnings to caring for rescued cats. Skylar began shadowing at The Cat Hospital of Media in March and started as a full-time veterinary technician in May. She is extremely excited to continue learning and growing in this field throughout her career.

The team at the Cat Hospital of Media have been working really hard through COVID to provide all of our patients the best care possible. In order to give everyone a much needed break, we are starting Summer Holiday Hours June 1st through Labor Day. We will not see appointments on Saturdays. We will be open 8AM-11AM for Boarding drop offs and pick-ups plus medication pick-ups.

We are so happy we can do this for the employees and give them a well-deserved break! In case of emergency, please call the nearest ER. View those locations here.