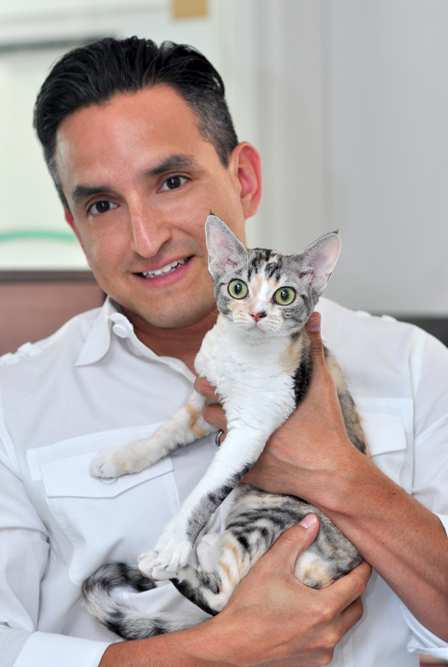 Paul grew up in Vienna, Va. He received an undergraduate degree in Animal Science (97′) and a graduate degree in Statistics (99′) both from Virginia Tech. He originally wanted to become a veterinarian (hence the Animal Science degree), but instead did the next best thing and married one. Although his career path deviated from veterinary medicine, he has always shown an affinity and love for animals. During his time as an undergraduate, Paul worked as a veterinarian technician for a small animal practice and also worked with thoroughbred race horses as a hot walker.

Paul has worked in the marketing research and consulting industry as a statistician since 2001. Since his consulting job allows the flexibility of working remotely, he has moved his home office to The Cat Hospital of Media since taking ownership of the practice in June of 2015. He now has a second job acting as Hospital Manager for the veterinary practice. Paul is eager to apply some of the advanced statistical methods he has learned in hopes of improving the overall efficiency, marketing, and client experience at the cat hospital. He is currently a member of the American Animal Hospital Association and has been actively participating in practice management training.

Paul, along with his wife, Christine, raise two children and 3 cats in Media, Pa. Paul is fluent in Spanish (Mother from Mexico and Father from Argentina) and enjoys speaking to his children (and Christine) in Spanish whenever he can. He also enjoys playing soccer, traveling, playing the acoustic guitar, and bike riding. You will often see him riding to and from The Cat Hospital of Media.

The team at the Cat Hospital of Media have been working really hard through COVID to provide all of our patients the best care possible. In order to give everyone a much needed break, we are starting Summer Holiday Hours June 1st through Labor Day. We will not see appointments on Saturdays. We will be open 8AM-11AM for Boarding drop offs and pick-ups plus medication pick-ups.

We are so happy we can do this for the employees and give them a well-deserved break! In case of emergency, please call the nearest ER. View those locations here.